I can see it now.  They are sitting around together listening to their favorite teacher, mentor, friend.  They are comfortable knowing He is there, He has the answers.  They aren’t always sure what He’s doing or what He’s talking about, but He is a capable leader, one to be trusted, He has led them and walked with them.

And then He tells them He is leaving.

He keeps on talking, but they don’t hear the rest.  He’s outlining the reasons why it will be good for Him to go.  He’s telling them about the Comforter.  He’s talking and yet listening to them as they whisper 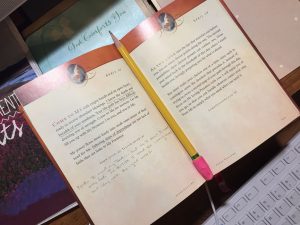 They are asking each other what He’s talking about when he says he’s leaving them for a little while and then they’ll see him again.

Mounting fear, that trembling dread in the pit of the stomach, the nausea of uncertainty.

And knowing their minds, He speaks their thoughts and questions out loud.  Plain words like boxes of mysterious contents now out on the table.  Instead of saying, “Yes I am leaving you,” He addresses the dread face first–the pain that is coming.

“You will weep and lament, you will have sorrow, but your sorrow will be turned to joy,” He says, paraphrased, in John 16:20.

I read this the other day when the daily reading in the book Jesus Calling by Sarah Young called for reading John 17:20-23.  I opened it to the wrong chapter and took these words personally.

I’m not a theologian or a preacher, but I read the Bible and use a Strong’s Concordance to lay out the words in descriptive terms. That’s how I Iearned that David didn’t just shed a few tears in Psalm 42; he roared with his grief and pain.  Yet I don’t want to read more into the Bible than what is there, and I’m aware I tend to relate to the sorrowful more readily than the joyful among us.

This grief over my dad has been unlike any other loss I’ve ever experienced, and the losses in my life began early.  There was the loss of innocence. And we moved frequently. Visiting family in Montana always meant pulling away again as if muscle and tendons were being stretched and made useless with the unnatural pain of pushing too hard as we would drive away from cousins, grandma, mountains, my dad’s brothers and sisters.  There were the long, weary days and weeks and months of separation from my parents.  Moving, not hours away from friends, but across continents never to see them again.  Loss of the familiar, easy friendships in which a person settles and knows, “This is my place.”

Not that my life was more arduous than any other persons, but that I understood sadness, and coupled with my personality, it became part of my permanent consciousness.

Then my dad’s mom passed away two years ago.  I remember at the wake we stood up one by one to talk about her, and I could not look at her– the matriarch of my family, lying like a porcelain figure in her gentle beauty.  A stabilizing factor, now still and silent.  It was unbelievable.

I watched my dad grieve her, and I saw into his heart as he looked after her. “Mother and Dad,” was the way he always spoke of them.  “Did you ever doubt your mother’s love for you?” I asked him one time.  “No. I always knew she loved me.”  Finally after many hours at the wake, listening to others share, my dad and Uncle Hugh stood with me to look at her face one last time.   Then they gently closed the box.

My mom’s mom passed a couple months later.  Two women who had prayed relentlessly for their families, now gone.  A great vacuum seemed to have settled over the world, leaving huge empty spaces where their influence had been.

But losing my dad has been losing my compass. I still know what is right and good, but there’s a section of my brain that says, “Who really cares?”  Part of my soul died and seems to have gone down into that beautiful box or it is up there wandering, lost in the bright and beautiful blue sky.   It’s not like I can rationalize that he was old or had been struggling for years with illness.

We sat at lunch last summer talking about some of our interactions with people, instances in which we were not sure if we were being too sensitive to what others take as nothing.  And instantly we knew what the other was saying.  My expression revealed his own reaction before he had finished telling me the story.  I told him about the darkness, again.  He knew and spoke into my world out of the depth of his experience with that same dark place.  This flannel shirt is such a classic example.  Almost irrationally joyful at finding a shirt with sleeves that don’t leave our wrists poking six inches into the wind.  I get it Dad, I get it!  And knowing above all Jesus was Human too.  Knowing no matter what, God is my judge.  There is the ultimately stabilizing Person even if He seems distant and silent at times.

I try not to grasp out at my people too much searching for a foothold, my friends who have come alongside me and us.  I know I’ve got all I need; I know he already gave it to me. And what he couldn’t give, I have in Christ my Saviour.  Some of those last conversations we had–now I look back, and they were eerily prophetic of what was to come.  If I had only known my worst nightmare was already eating away his bone marrow.

I turn my face to the God Who has always been there, silent as He was for so many years.

I look into the faces of my children whose little worlds are still mostly peaceful, whose problems are monumental only in their own eyes.  I still have the answers for them.

So, when I accidentally read this passage in John instead of the suggested passage, the harrowing ache of my heart latched onto the Jesus who wept, the Jesus who said Come unto Me, the Jesus who said tenderly to Mary, “Why are you crying?” The Jesus who heard his chosen few whispering among themselves wondering what he was talking about, and then brought it out for them when they could not ask him directly.

Jesus knew His disciples were going to miss Him.  There would be grief, there would be sorrow.  As if bone and muscle and ligament structure would be compromised causing the kind of pain that can only be endured, attempts made at soothing, and allowing the passage of time to restore full movement.

I took it personally that He acknowledged and validated for them the awful pain that was coming.  Not just a few tears shed, and then on to singing joyfully.  No, there will be weeping and lamenting; you will be sorrowful.  There will be Peter hiding in his fishing boat, going back to what he knew best.  There will be Thomas doubting.  There will be Gina not knowing exactly how, but walking forward anyway.  Vaguely asking questions, reaching forward to what He surely must want me to do, open toward the kindness and love of friends and other people.  Just keep moving forward.  You will be sad, but joy is coming.  Don’t try to work it all out for yourself now, just know I am working it out.  Keep your hands open so I can direct them.

There are the frequent moments when I want nothing more than for Heaven to be now, now is the time.  Let’s go.  (Dad, I know we aren’t the same in Heaven as we are on earth, but I want to see you.  Now.)  Still, there is the calm assurance that God doesn’t want anyone to be lost to Hell.  He is waiting so that others will be saved, before it’s eternally too late.  My dad understood this, and I rest in that knowledge too.

Dad, I asked Him to use me.  Anything God!  Use me even though I am afraid of people; they need You.

And now, He broke my heart.  And He says, Gina you will weep and lament, but I will turn your sorrow into joy.

Please, God, make it worth it.  Let me be used so it will be worth it.

2 thoughts on “Weep and Lament”