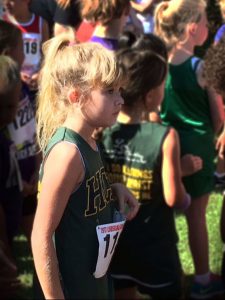 October 7, 2017.
It was a normal Saturday except we were all home with no specific plans to go anywhere. Since the girls started Cross Country we’ve had several Saturday races. If they’re not racing, sometimes I’m working, and occasionally Brad goes fishing if there are no races and I’m not working. It felt good to be home. My plans to get up early for a run fell through secondary to laziness and then realizing the kids were all up before 7a.m. A couple hours later, Brad took Naomi to town to look at lawnmowers, and I cooked the usual pancake breakfast.
That’s when the day got interesting.
Sophia is a tenderhearted soul. When Josiah was born I saw she had a little mama’s instinct to protect and cuddle. She can be difficult to discipline because she takes everything into her deepest heart, and it comes out in tears and a fallen countenance. She’s the first to be concerned for the hero of the movie at the least encounter of danger, disappointment, or trouble. I cover her ears in church sometimes because any theme involving death or child abuse causes her anxiety I don’t believe she needs.
But the Gospel of Jesus Christ is different altogether. We have never covered her ears or heart when it comes to the most important story in the world. We didn’t exactly unload the gory details of crucifixion, but we have always explained that we, being sinners, require a Saviour. That Jesus, through His death on the cross, satisfied the penalty for sin which is death. That He rose again on the third day making Him victorious over man’s worst enemy: physical and eternal death or separation from God. And that to accept or reject this victory is a personal decision for everyone on earth.
For weeks now, even months, perhaps a year, Sophia has been mulling these ideas over in her mind with ever increasing understanding. I could tell she wanted to grasp the concept of salvation, but it was not personal to her individual soul. She could answer the rote questions, “Why did Jesus come to earth?” [To die on the cross for our sins.] “Who did Jesus die for?” [Everyone.] “And then what happened?” [He rose again on the third day.] But making the leap from “our sins” to “my sins” was too much. Understanding that getting into Heaven could only be done through One Saviour was also a stretch for her. Not that she thought there were other ways, she just didn’t understand the concept of getting from here to Heaven.
Last week when I went up to tuck the three older ones in bed, I found her crying while looking at a book.
“Sophia what’s wrong?”
“I just don’t like the things they did to Him.”
“What are you looking at?” She showed me a large book with 1970s color pictures of Jesus before Pilate, Jesus being whipped, and Jesus on the cross. My stomach dropped. I didn’t know they had this book in their room, but judging by the pictures it was something my mother in law had when Brad was a kid. Several of his old series have made it to the house, and this book had not caught my eye. The pictures weren’t especially gory, but the horrifying reality of Jesus’ torture, shame, and death were clearly depicted.
“Oh my girl, you probably shouldn’t look at this,” I said gently removing the book from her lap.
We had a talk about what the pictures meant and why Jesus died on the cross. She hesitated when I asked her about her own sin. With children I have noticed this reluctance to think of themselves as sinners, just like I do. In children though the reluctance and worry shows on their faces. Being bad as a child often results in instant negative consequences so to share the Gospel with a child and put them on the spot about their sin, is to ask them to walk on thin ice and risk getting punished for confessing a wrong doing. Sophia acknowledged her sin, the fact that she had done wrong things, but she didn’t understand me when I asked her how she could get to heaven. I could see she was sleepy and unable to think clearly, so I said, “Maybe you would like to think about this a little more and talk about it later.” She said, “Mm-hmm” and fell asleep.
Uppermost in my mind when talking about Jesus and the Bible and our evangelical Christian beliefs, is comprehension not memorization. We do encourage and instruct our children to memorize verses for the sake of instilling truth in their minds; we also expect obedience without understanding for such activities as prayer and church attendance. But they are quite young and unable to process the deeper reasons why these choices are healthy and desirable. Full understanding can come later. But when it comes to grasping the Gospel, a child must make a conscious decision to accept what the parent is saying. She must be able to apply the principle of salvation to herself and see that no one else can make the choice for her and that there is in fact a choice to be made.
So on Saturday morning when Sophia sat down to her pancakes and could not eat, I came near her.

“I just feel funny,” she said.
“Like what my girl?”
“I don’t know. I have a funny feeling.”
“Are you worried about something? The storm is just going to be rain and probably thunder.”
“No, not the storm,” she said looking for words.
“Does her tummy hurt?”
“No, I just feel funny.” Her face was a little drawn.
“Is it a bad feeling?”
“No…..I just don’t know if I’m going to Heaven.”
I am not a reader of minds or an interpreter of hearts, but I could see that she was under conviction or I’m blind and don’t know my child. She had heard the Gospel during the week at least once; I knew this because I had told the story the previous Wednesday night at church. But this was Saturday and no one had been coercing her into making any decisions about anything.  As with Naomi I felt completely inadequate to lead her toward Christ because I myself am nothing but a fallible human being. What if I say the wrong thing or reassure her and I’m wrong?  But, I reasoned, God has given me the tools and knowledge so I will trust Him to help me know what to say.
At that moment Joshua, settled in front of his pancakes with fork in hand, started screaming for no apparent reason. Seeing no danger, Sophia and I left the boys in the kitchen and went to the bedroom where I reviewed the basic steps of salvation. Sophia acknowledged that she is a sinner. This time the understanding was there. Her face was drawn and sad. “And Jesus died on the cross for your sins?” She nodded. “So you need to pray and tell God you are a sinner and that you accept Jesus’ death on the cross for your sins. Thank Him for saving you.”
She faltered at praying on her own so I led her in a prayer, just as my dad did for me thirty-seven years ago. Her tears were falling fast, but she followed along repeating the prayer. When we said “In Jesus Name Amen,” I looked up at her and said, “Sophia you just accepted Jesus as your Saviour and this means you are saved.” A smile broke over her face and then as if I’d planned it, I went to the closet and got the new Bible I’d meant to give her a couple weeks earlier. 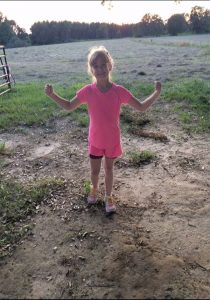 We went together into Brad’s office where I filled in her name and the date. Just then Brad came in and Sophia told him the news.
Then suddenly I remembered the pancakes still cooking on the stove! I ran to the kitchen where Joshua had been set free.  Then I saw Brad had removed the pancakes and poured new ones in the frying pan.
My child accepted Jesus as her own dear Saviour, and I had not burned the house down in the process. An amazing beginning to a beautiful day!