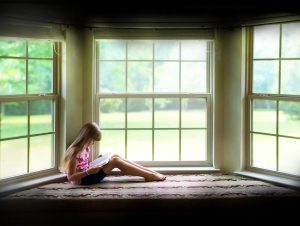 It was Saturday June 3rd, about 7pm. Pale light coming in the bedroom window lay across Sophia asleep on the floor. I had walked up the stairs with my Bible in hand planning to read Psalms chapter one to the girls and kiss them goodnight. We had memorized this chapter when I was a teenager. Since then I had loved the analogy and the hope it provides to believers like me who understand growth in Christ can be a long process. I picture a large tree full of luscious green leaves waving over a gently rolling river, maybe deep and brown or shallow and clear, like the rivers id known as a child. Emerald grass grows beneath it and the tree is complete in the fulfillment of its purpose.

Naomi was reading in bed, and there was Sophia reenacting the sleepover the girls had had the night before.   I sat on the floor by Naomi and told her I was going to read a chapter to her. Josiah sat down beside me and we began. I read slowly as the old English can take awhile to sink in; I knew it wouldn’t all process but Naomi has listened to the King James Version since before she was born. I used intonations and pauses in the right places to emphasize words and draw Naomi’s interest because the Bible needn’t be read in a monotone.

At the end of the chapter it says “For the Lord knoweth the ways of the righteous.” Always looking for ways to help my kids understand the Bible is a book written for personal use, not just a tome for the masses, I asked Naomi if she knew who was righteous.

“Some people are,” she answered sinking down into her bed. Naomi is intentional in her conversations especially when it turns to personal thoughts. To press is to destroy her ability to form her ideas into words and verbalize them.

“Do you know what makes them righteous?” Instead of staring into her face, I averted my eyes.

“God does,” she paused, and I saw a look of reserve came over her face.

“Not everyone is righteous, right? In fact the Bible says ‘None is righteous, no not one’ doesn’t it?” I was referring to Romans 3:10 but I couldn’t recall the reference. Naomi knew this verse though and agreed.   “But we can be righteous. Listen to this,” I said turning to my concordance for another buried reference. Josiah, kneeling at my feet asked if I was going to stop reading the book. He had fallen asleep earlier and was not ready for bed. He wanted me to go back downstairs with him, but I asked him to wait as I searched for the “righteous” reference and silently chastised myself for not keeping up my memory verses.

“Here it is Second Corinthians 5:21. It says, ‘For he hath made him to be sin for us, who knew no sin; that we might be made the righteousness of God in him.’ What about that?” She was listening closely, but reserve and doubt still clouded her face.

I knew at any moment like an owl or a turtle, she might close her eyes and clamp down and go silent. Quietly, I presented each pronoun in the verse asking her who they represented. She knew “God has made Jesus” and us means the people in the world.

Tears were welling her in eyes now and I felt unsure, a bit confused. What was weighing on her so heavily? Did she understand, but not believe? Still, she was listening and waiting for me to continue. And underneath my calm voice and dry eyes I was praying for wisdom and supply for my woeful lack. Wisdom in how to meet her need and supply where I had forgotten memorized verses. I remembered the absolute treasure of John 3:17 and 18, missed for years by me because John 3:16 takes the spotlight from the time a church raised child is holding fat crayons in the pre-K Sunday School class.

“Okay so here it says God makes us righteous because Jesus took sin on Himself even though He had never sinned at all.   And why would God do that? Do you think that if maybe we are very good, we can be righteous too? I mean if you always obeyed me and never did anything that made me or Daddy unhappy or never made mistakes?”

Tears were sliding down her cheeks as she shook her head no.

“We have sin even when we’re good. We are condemned.” A blonde head nodded, more silent tears. “Do you know what condemned is?” She nodded her head again. “It means we are guilty, we deserve punishment. But listen to this; this is good.”

I didn’t want her to think immediately of John 3:16 so I read verses 17 and 18 without telling her the reference. “For God sent not his son into the world to condemn the world; but that the world through him might be saved. He that believeth on him is not condemned; but he that believeth not is condemned already because he hath not believed in the name of the only begotten Son of God.”

It was painful to see my daughter crying. She always enthusiastically answers the questions in Sunday School and other children’s classes at church, and yet when I had talked to her one on one in the past she became reticent.   Several months earlier she had raised her hand when a teacher had asked if anyone wanted to know more about salvation. Still the conversations would end with me not knowing how much she understood.

One of the primary concerns of parents who believe on Jesus Christ as the Way, the Truth , and the Life is to share this truth with their children but avoid having their children make a profession of faith under duress or as a copycat act. So we never pushed Naomi for a confession or led her in rote prayers asking God for forgiveness. We know the Gospel is so simple even a child can understand, but even for one so young, it must be the Holy Spirit who leads.

But this night something was different in her demeanor, and I couldn’t quite figure out what it was. In a nine-year-old child I would expect understanding to be accompanied by exuberant acceptance of Jesus’ gift as a child accepts any valuable gift. Or I expected her usual withdrawal and apparent lack of interest, a cover for deeper feelings. I was hoping to help her express those feelings this time. I know my daughter has not committed any heinous crimes and cannot look back at her life full of woe that Jesus couldn’t possibly save someone as wretched as she, and yet, I began to see that was just it. Looking at her damp face, reddened with sorrow and consternation, I realized she could not believe Jesus would die for someone as sinful as she. She knew it went deeper than disobedience and mistakes in math.

“Naomi you’re a good girl. You work hard, you try to obey and you usually do. But we are all sinners. We aren’t good enough for Heaven and God, but listen now to this.”

And with my heart rising in my throat, feeling as though eternity truly hung in the balance, I read it to her slowly with the usual cadence developed over the centuries, but without undue emphasis, “John 3:16 For God so loved Naomi, that He gave His only begotten Son, that if Naomi believeth in Him, she should not perish but have everlasting life.”

She knew then it was for her too, even her. Full of this thought, her tears continued. Relief. In the past I had heard my child weep with the understanding that she is one of the five most important people in the entire world from my standpoint. That I remember the day I knew she was going to be born, her first cry, and the day we brought her home. When I recount her pricelessness to me, she weeps as if she cannot stand such knowledge. Those same tears fell again that evening as the sun went down and the window grew gray.

For most of my life I have struggled to believe God loves me as a precious possession; Satan laid the groundwork for doubt and I took up the burden where he laid it down. I believe in Jesus as my Savior, knowing the extent of my sin and understanding our imperfect state is handed down from Adam through all generations. But to see my daughter struggling with the same difficulty has put a weight on my soul.

I asked her if she had ever told God she wanted to accept Jesus as her Savior. She said no she had not.   I invited her to come sit by me where I still leaned against her bedrail. “I can say the words and you can repeat them after me,” I said. “That’s how I did it when I was little. My dad told me about Jesus dying on the cross for our sins and I believed on Him. My dad helped me pray and thank God for salvation.” She nodded.

We sat there on the floor and she repeated a simple prayer acknowledging that Jesus died on the cross to pay for her sin. Then typical of my girl, she said she didn’t want to tell anyone. Again I waited for her to explain, wondering shouldn’t she be bursting with joy right now? But I don’t recall rushing to tell anyone of my experience with salvation either. It was profound and intimate, a personal decision made for clear and earnest reasons, something to be treasured and shared in time. People tend to smother with hugs and exclamations when good news is perceived. A squeeze of the arm and a smile might do the reserved soul much better.

“I just don’t want too much praise,” she murmured. And that I understood. She dried her tears and blew her nose while I waited there, my own thoughts soaring with pure joy. To know the angels rejoiced with me was enough at the moment. Then my first born and first to be reborn, climbed back into her bed and soon fell asleep.