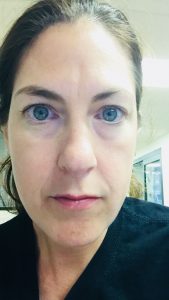 I have tried to limit the requirements I make of myself in this grieving process.

A few weeks into it, after Jason had gone back to Bolivia, we were talking about how we were handling our emotions, and what we thought we would do in the future.  We are believers in Christ so there is the understanding that we are to be thankful in all situations and to make our requests made known to God with thankfulness.  We know we are to have joy and peace.  We know God is good even though He knew this whole story before it happened.

Added to these truths is the understanding that allowing self-pity to engulf us would be harmful, detrimental to ourselves and those around us.  These pieces of information are like colors on a backdrop of our journey.  They are like ornaments to be chosen, they are tools to be wielded, they are weapons against the twin enemies of anger and bitterness.

There’s also the understanding that Jesus was human, a living person born as a baby on earth, who experienced everything we experience and who felt grief.  “Jesus wept,” (John 11:35.)  So, because of His testimony, we are granted permission to be sad.  Because Solomon also said so, we allow ourselves to accept a time of mourning without feeling guilty because we are not always displaying joy.

Early on we knew there would come a time when the shock would shift into sorrow and then shift again, and we would have a choice to make.

“We will know when that time comes,” Jason said.

It was a WhatsApp conversation about the need to remain alert for the choices that would be coming.

Two months later, I was standing at a fence with another Track & Field mom, and she was telling me about her days and weeks and months after her dad passed.  I was telling her, carefully, in case she didn’t follow me and I was just a fool, that “my pain is all I have right now.  It binds me to him, it’s what I have left right now.”

She paused, reaching.  She was reaching back into her memory because our eyes were clear, and we had made a connection, and she knew that if I was saying something honestly, then it was not foolishness, self-pity, refusal to move forward.

“Yes,” she said. “And then there will come the time when you have to move away from that.  It’s not that time right now.  Right now, the pain is what you have. But you will know when it’s time to move on.”

And I believed her, because she has been there.

Today, stifling the rising sobs, quickly wiping tears, forcing myself to think of anything else because that is the choice I have to make right now at work, I thought about that again.  How to let go at the right time.  At the end of the day, I began talking with my coworker whose dad passed suddenly and unexpectedly over a decade ago.  She recounted the details.

Listen. They know every detail down to the hour of the day.

Monumental griefs of our lives, imprinted like hands in soft concrete, are solidified forever in our minds.

I said to her, “It’s not that I don’t want it to get easier.  I don’t want to be drowning every day for the rest of my life.  But,” and I held up my hands to show her, “the farther I move away from the time period that he was alive, and the years pass, and the time when he is not alive gets longer, I feel like I’m moving farther and farther away from him.”  Would she get it?  All these years later, did she feel that too?

“That’s a poor coping skill,” she said standing a few feet from me.

“Ah, well, yes–” I faltered.  A year ago I would have chastised myself for my stupid, inept ability to even grieve properly.  But now my thoughts quickly went to the blue chair, the deep hole, the soft earth,

the very still, very calm, strangely sleeping Dad.  At this moment in time, this is not a poor coping skill, it’s survival.  It’s trying to figure out where I am, and what I’m doing.  She was speaking as she thought, and our words almost overlapped as she added, “But it’s still new for you.  How long has it been?”

“It’s still fresh for you,” she said.  “You will have to find your own way to know he is still with you even though he is not…with you.”

We talked about that for awhile; I told her about the Great Cloud of Witnesses.  She told me how she felt his presence.

Most of my emotions concerning my dad are sadness, confusion, loss, hopelessness, wrenching sorrow, tinges of undirected anger, fear.  There are moments of loss of equilibrium; my head seems to shift without moving, under my feet the concrete moves just a bit.  My temples feel hollow; my eyes feel like giant orbs attempting to open far enough to take in all that is now true that wasn’t true before.   If my pupils can dilate to the size of quarters, maybe enough light will get inside my eyes so I can see everything properly, and put it in its place.

“I have barely cried,” I told another friend in the beginning of February.  “And I’m a crier. I cry a lot.”

“Be prepared,” she told me, “to make room for grief.”  And then she told me the story of how her own grief was pushed down because of family circumstances and pressing needs.  Everything seemed okay; it wasn’t that she didn’t care, but it all seemed sadly settled.  One night she startled herself awake, screaming for her husband, shaking and sobbing.  Six months had passed since her loss, a baby who didn’t live to viability, but grief had come calling in its own time.  “You will have to forget work, the children, everything, when that happens, and just let it take over you until it passes.”

Will that happen, I asked myself?  How can you forget everything?  What about responsibility?  Is this a luxury or a need?

So even now, grief is pushed down for work, for children, for normalcy.

And I try, despite the knowledge of peace and joy and thankfulness, not to force expectations on myself.  I am thankful. There are probably 100 things to be thankful for in all this, and that’s not even naming individuals separately. One hundred good instances and events and circumstance between December 15 and January 18, and then one hundred more after that until now.

But I can’t look too hard at that.  When a person has been gashed open, broken, ran over, suffocated, there is a recovery time.  During the recovery, they strive to do all they can to get well, but it’s a process.

After giving birth I came home on narcotics. Each one of my children’s entrance into the cold world warranted prescription pain killers upon discharge.  Each time I took the medication as needed, keeping ahead of the pain as much as possible, but not lying in bed sedated.   It hurt to move, to use the bathroom, to cough, to sit, to lie down.  With Josiah, I developed a weird catch in my side, and for a few days I couldn’t sit up without help.  So I took the pain medicine.

Until I realized, with each new baby, how much I did not need it anymore.

I remember distinctly one evening when Joshua was about two weeks old, I thought, “I’m not really hurting badly anymore, but it will help me sleep if I take a pain pill.”

Newborn babies are exhausting, and there’s nothing wrong with a good night’s sleep.  But as soon as I realized I was about to take narcotics for sleep instead of pain, I put them away and didn’t take another pill.  I know myself and didn’t want to hold the door open for addiction.

That is how I anticipate the shift in grief to be.  I don’t want to be addicted to and crippled by pain.

As time goes on, I will know when to give up the pain pill of disbelief, the pain pill of not embracing the distance, the pain pill of avoiding looking at the sky.  Coping with these–while continuing to live, enjoy living, Looking Unto Jesus—it is okay at this stage.  Taking pain pills, but not lying in bed sedated.

One friend released his daughter’s spirit and encouraged her friends and family to embrace joy, forgetting sorrow.  This was one year after her passing.  He gave up the pain pill of holding onto her spirit in his heart; he made a conscious choice to see her happy and whole in Heaven as well choosing joy for himself.  He will still grieve, but he has released some of the hold grief has.

My dad isn’t coming back.  Admitting it to myself and writing it on this white screen causes a lump in my throat, a tiny rise of panic.

I have my whole life to process this awful truth.  Every anniversary of everything, milestone, holiday, major event and probably most of the minor events will remind me he is not here.

I don’t intend to rush it, but I plan to listen for the cues, the Truth he loved so much, the signals, and move forward in it.

Isaiah 57:15 “For thus sayeth the High and Lofty One, that inhabiteth eternity, whose name is Holy;

I dwell in the high and holy place, with him also that is of a contrite and humble spirit, to revive the spirit of the humble, and to revive the heart of the contrite one.”

Ecclesiastes 3: 1, 4 “To everything there is a season, and a time to every purpose under the heaven,…

2 thoughts on “A Time to Mourn”