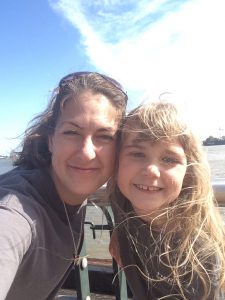 “My girl, I’m giving you constructive criticism. It’s not that I don’t love you or that you are a bad person. I’m just showing you something you can improve on.”

I saw her silent tears. My heart was sinking, and I felt uncertain. Downstairs the baby was toddling around screaming, and the six-year-old was trying to console him. I raised my voice a half octave because this conversation should not be cut short.

“Let me tell you something I struggle with. I worry. I worry a lot, and the Bible says, ‘Don’t worry about anything. Trust Me.’ But I still worry. I worry about you being at school and how you’re doing, or where you might go to college, and how you’re doing in math since you struggle with it. I worry about leaving you to go work so often.”   I tried to keep my confessions on the light side–nothing about the possibility of falling behind in school tuition payments or dealing with rising food prices, the possibilities of adverse reactions to vaccines or the fact that Brad had already seen three more birthdays than his father did.

Her little fists dried her face. She was listening.

“And sometimes daddy has to give me constructive criticism. He says, ‘You are so worried but God has always taken care of us. He will take care of our kids too. You lose the joy of today when you worry.’ So, I feel badly that he is telling me I’m doing something wrong, but I know he loves me so I listen.”

I watched her sad face to see if what I was saying made sense. My girl is a reserved person when it comes to her deepest feelings. I’ve learned she can be the life of the party among her friends, but she prefers to keep to herself for hours at a time, reading, drawing, and developing her ideas. Even as a toddler she often followed the rules more easily if she knew the why behind the command.

Her head nodded against her knees where she had pulled them up to her chest.

Earlier in the afternoon I had let the girls know I would be arranging the large extra room upstairs for my own personal use. “It’s going to be my sanctuary,” I told them. “My place where everything is in its place at all times because no one comes and moves it, or breaks it, or borrows it.” Brad and I had been planning this for months, and we laughed a little as their faces registered confusion. We know having a place of respite from reaching little hands is important, but for the most part they have been allowed free access to every room in the house. Now I would be able to set up my sewing machine without taking it down every time I was finished with it. There would be a desk, my library of literature and textbooks, and to the little ones’ unending dismay, the overstuffed chair and ottoman that had been filling up too much space in the living room. They wept with grief over this! It was such fun to jump on the fat chair and so comfortable! Never mind the dust mite allergy two members of the family combat continuously, and the numerous other seating options in the house. Brad and I were surprised at the level of distress they showed over this. We no longer chuckled as he helped me shove the two pieces of furniture up the stairs. There’s something more, I thought, and looking at my oldest I’d had a good idea of what it might be.

Now upstairs, I was sitting with my daughter on the floor discussing the deeper dismay. The dismay of being told she finds it difficult to manage her belongings. Her books, clothes and toys are scattered, as a typical child will scatter them. I’ve learned time and again my belongings get broken, lost, or strewn when she and her little siblings handle them. So I cannot give them free access; my new room will be off limits, visitation by invitation only. I imagined sewing lessons and reading hours, tea parties and movie nights. But for my oldest girl this translated into rejection, a devastating personal shortcoming, a stamp of disapproval, a door closed in her face.

I would like to say our conversation ended in hugs, smiles and understanding. But the baby, once consoled by my mothering six-year-old, was screaming again. This time the little mother was screaming too, hands out for emphasis, “He fell and his lip is bleeding! It’s bleeding!” On examination, there was a tiny smear of blood on his upper lip, and he wanted his bottle. My big girl came down the stairs shortly after I did and, wrapped in a blanket, she quickly became absorbed in her book.

Although I prefer neatly finished endings, I’m okay with the less than perfect exchange with my daughter because the deeper conversations are unending, interrupted, and sometimes inconclusive when there are many small children in the house…or when there’s just one child, friend, coworker, husband, or relative involved. I’m not always patient, but I’m satisfied to know there will be another opportunity later.