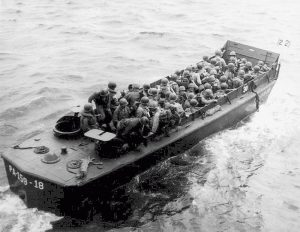 I imagine the men standing in the bottom of this boat still, silent, resolute.

They are sure of their task and unflinching.

They don’t give the orders; they take them.

I don’t see them singing, seeking reassurance, lifting others up.

Whatever they needed for this task had already been stored within them.

On December 18, 2017 just after midnight, my uncle dropped my children off at my parent’s house and turned to me where I was sitting in his passenger seat.  He and my cousin TJ had picked us up from Seeley Lake where my Aunt Becca had brought us after we landed in Helena hours earlier.  I was meant to get out as well and go to bed, but I hesitated.

“What do you need me to do?” Uncle Hugh asked as we sat in my mom’s driveway.

“I need to see my dad,” feeling bold to ask for even more than had already been given.

He was exhausted, he had classes to teach the next day, he had been working and driving for hours.  He didn’t hesitate for one moment, but turned back into the snow and drove me to the hospital.

I had not seen my dad yet, but I had followed his story since he’d gotten sick and then received the diagnosis.  I’d heard the unspoken fears in everyone’s words.  I had pieced a picture together of what he looked like and what was happening to him.  My uncle, measuring his words, warned me that my dad didn’t look well.

In a moment I won’t forget, half surprised at my confidence, I looked at him in the semi dark and said, “I know I have come here to bury my dad.”

He returned my look and was silent.

My words were both a statement and a dismayed exclamation.

It was also premature, a conclusion no one needed to come to just yet.  But I knew.  And he knew.  My mom also knew.

We held out hope, but still we knew.

Three weeks later, I was in Mississippi about to board another flight to Montana.  It was January 12.  My dad had just arrived home on hospice in Montana, and my mom had sent a picture of him to my siblings and I.  He was a ghost with dark eyes looking out as if from the other side already.

I received a text from my pastor’s wife as I waited to board.  It came across as a paragraph of something very beautiful about pain and God’s leading in it.  Too many words were weighty and untenable so I skimmed it and texted her back.  “God has prepared this path for me.”

I knew the groundwork had been laid.  God was not surprised.  He would lead me over the cutting rocks of this path.

Three weeks later I flew home again having fulfilled my premature declaration to my uncle.  Everything had been done that could be done, and it was over.

And yet it was just beginning.  Now four months and several days have passed since his last breath, and I’m going back to Montana.

And so I look at the men in this boat, and I’m reminded of a story I heard about an old soldier who was on a flight to Iwo Jima.  Long since retired he was going to see the place where he fought the enemy and lost so many friends.  Next to him on the airplane was a young boy going with his family to see a bit of history.  As the old soldier sat in contemplative nostalgia, the boy chattered about the trip.

Suddenly, in friendly manner, and showing his lack of understanding, he asked the old soldier, “Have you ever been to Iwo Jima before?”

“Oh yes,” came the reply from somewhere deep in thought.

“Oh! How did you enjoy your time there!?”

What reply could there be to such depth of ignorance; there was no unkindness there.  Just a child making conversation about a vacation he was taking, but to begin to explain would be almost impossible.

I’m not about to go to my death on a Higgins boat, and I don’t have a tenth of the bravery and stamina of those men who gave their lives–either their best years or their lifeblood.  But I picture them, and try to emulate them now.

A few have told me, “You have to face this reality.  Accept the truth.”  And I do contemplate this advice seriously.

But don’t they know that when I face reality, full on for several gruesome seconds at a time, I become morose, the world seems to fly apart, panic takes hold?  It passes in a moment as I return safely to my refusal to look too hard at the truth.  But now, I will face it like a wind that blows from two directions and swirls and buffets.

Because he won’t be there.

Of course not.  No big shock there.  I imagine everyone thinking this, looking at me curiously.  “Are you genuinely surprised?” I imagine them asking.

Yes, more or less, I am.  I guess unless you have lost someone who is part of you so completely, it will not make sense.  How, after four months can something that has already been completed and forgotten by many, still be a shock to me?

What were those soldiers thinking as they stood on the boat?  How much did they know?  These are questions I can’t answer, but I venture a guess that they weren’t focusing too hard on reality: that they could die, that they were thousands of miles from home, that death was likely to be painful, that they would see carnage, that they would need to kill.  I imagine they had each found a place in their minds during their training where they could go to maintain composure under every circumstance.

Peter found this place.  He looked at the face of Jesus.

This is my place too.

As I walk my path again, where my dad is not and will not be, I will be very still inside and focus my attention on Him who gave His life for me.  He is gentle and good.

He doesn’t give me the entire gamut of reality at once.  He gives it in pieces.  Is this just my imagination?  I don’t know, but I will traverse my dad’s country where he loved and lived and fought his battles, and I will make sure of this awful reality, solidifying for myself the unspeakable truth which is true.  Am I mad?  Am I the woman in the yellow wallpaper? (The Yellow Wallpaper by Charlotte Perkins Gilman)

What I am sure of is this: God prepared this path for me and me for this path.

My dad may have left me, meaning no other human on earth can finish my sentences or follow my thought patterns so exactly, but I’m not forsaken.

A host of souls surround me with their bodily presence and care.  Not the least of which is my husband and my children, my mother, sister, brother and my aunts and uncles.  And friends whose price can never be named.

My God, He never leaves me or forsakes me.