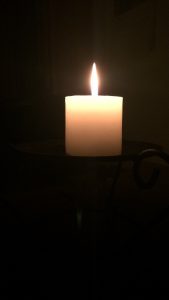 Matthew 5:16 Let your light so shine before men, that they may see your good works, and glorify your Father which is in Heaven.

I’ve been posting random thoughts on Facebook for years now. They usually come to me after bedtime, and I know they have to be written immediately or be lost.  It’s a helter-skelter way of writing.  It’s like setting a two year old loose on a batter laden beater.  It’s not going to be perfectly cleaned up when he’s finished, but it was pretty good despite the mess.  I have a small steady following on Facebook, a few stalker readers that I know of and appreciate, and a group of reliable commenters.  When an outlying Facebook friend comments, likes or loves, I’m gratified to have reached someone new with my thought processes.  (Someone related to this!  My heart is full!)

When my dad was diagnosed with cancer last December, I asked my siblings and my mom to keep it off Facebook.  They were in agreement.  I don’t know if they just hadn’t thought of posting on social media or if they already felt the way I did–that posting would be TMI for the general public, our collective social media friends.  I was probably the first to change my mind though.  I quickly realized this was going to be the battle of our lifetimes, which was overwhelming since we had already been through cancer with my mom in 1994.  I wanted the support of our friends and as countless others have learned, Facebook is a swift and sure way to reach nearly every friend you’ve ever met since childhood.  With my family’s permission and proofreading, I began posting updates on Facebook.  We drew strength from the feedback, most of which included promises of prayer.  We kept the grimmest details to a minimum while trying to show what he was dealing with.

As our battle grew more and more hopeless, I left out more details and focused on how we felt, and how we were handling my dad’s diagnosis.  I had no desire to show his struggle in all its humiliating detail and included zero pictures of him in his new state of being. My dad was never sick in his lifetime, except the time he broke his back at 17 years old.  He relied on the family dog to be his crutch as he staggered alone back to his house.  He had minor surgery in his forties.  He was concerned about heart disease and often joked that he was about to have The Big One. It wasn’t funny, but it was.  He kept his doctor appointments and required no prescription medication.   At his lowest hour physically, even though he stood and walked on his last day on earth, we all wanted to keep the gawkers at bay.  I had made my posts public so my parents’ and siblings’ friends could follow our journey, and we loathed the thought that someone somewhere might be watching only to see his demise.

I remember the pastor of my dad’s church asking me something concerning the service, and I thought, “Am I making these decisions?  Isn’t there a grown up or someone else he should ask?” But in fact, my mom and I fielded the questions with me deferring to my mom always.  Thankfully we were able to rely on the detailed instructions my Dad had left behind. When it was over, my posts became cryptic.  Like my thoughts, I held everything in check.  Eight days later, we closed a chapter of our lives, by watching the gravediggers cover him in earth.  I felt silent; I felt like an intruder in someone else’s nightmare.

Then they began coming to me again: words, phrases, thoughts, feelings, questions, paragraphs of what we were experiencing.  We were all walking in a foreign country called Grief.  There is no grief like losing a child.  I can only try to imagine how that loss hollows out a person’s soul and leaves their eyes blank.  But there is also no grief like losing your husband of 45 years.  My imagination searches for the words, sensations, and shocks that come to the one left behind.

And nothing has knocked me flat like losing my dad.  Being sent to boarding school as a six year old comes close, but that was blind and ignorant grief, the confused grief of a child.   This is knowing grief.  I know what I have lost and the bedrock on my section of the earth has been cracked open.   It happened quickly.  We lost him to an illness so ferocious we were told almost daily, “He is having symptoms that are atyplical of multiple myeloma.”  Almost daily there were new complications apparently unrelated to MM. I remember how his hemoglobin hovered at 8 day after day after day.  I remember thinking, “How insane is it that we are grateful for a hemoglobin of EIGHT!?”

Until finally, three weeks and three days after receiving his diagnosis and being admitted, the oncologist said, “There is nothing more we can do for you.  You can keep trying treatment, but it isn’t working at all, and if we increase the strength of the treatment, it will cause you more harm that you cannot tolerate.” My dad thrived on the honesty of the doctors; honesty was a defining characteristic of his.  And as a nurse knowing how vague doctors can be, I also grabbed onto the forthrightness of our hospitalist and oncologist.  Two days later my dad moved home on hospice believing against all logic that he would get well.  And six days later, The End.

After I got home from Montana I began posting again,irregularly.  Like atrial fibrillation, the rhythm of my facebook posts was predictably unpredictable, but they kept showing up like the spikey QRS on an a-fib telemetry strip.  All along I felt like I should go back to this blog.  This blog that has been in my head and has boggled my mind and sat like a mountain of impossibility.  To post on the blog is like requiring the toddler to thoroughly clean up his beater, and polish it with appropriate photos.  It’s not the book publishing quality of official, but it takes more thought than tapping out three paragraphs on a handheld screen in the dark before crashing into sleep.  I have technology impairment disorder.  Facebook is so easy, I can write and add pictures with ease.  Blogging requires firewalls and passwords and photo compression programs, password changes, angst about layout, and twenty tabs on the side of the screen with names like SG Optimizer most of which means nothing to me.  But Jason runs that part for me so I have no excuses.

And since my dad left me, yes left me, here on earth…he is more present with me than before.  He is constantly here saying, “Write about things that matter Gina.  Don’t be another person, another woman, handing out advice and writing about your daily personal problems.”  I was hurt when he said that to me, on the phone last November, because that’s just about the sum total of my blog to date.  We argued about it.  It wasn’t that I wanted to prove my content was valuable as is; I just wanted his approval.  I have always wanted my dad’s approval.  I have relied on his guidance and advice, his encouragement and his feedback for my life decisions and problems.  Being of similar character and quality, we almost always agreed.  But when I didn’t know what to do, he was there to shine a light.  In many ways, he had already been there even though he was a man and I a girl, a woman.  Our make up was the same.  Our internal need for truth and justice and our tendency to be harsh on ourselves and others was the same.  He got me.  He knew just how to respond so I would not crush myself in self hatred, and so I would also not elevate myself in my mind too much.

Today, I decided to come back to the blog.  To wean myself away from the instant gratification of Facebook and strive for more discipline.  To plow through the obstacles.  My content may still not be as deep as the ocean, but it’s a jumping off point.  I want to write about this horrible journey, often similar and even exactly the same as my siblings and mom, but also different for each of us. I want to preserve, for myself and others, who my dad was and is.  What is the point I ask myself?  I worry that at the root of it, I want attention.  This is the antithesis of what a “good Christian” is because we should only desire to glorify Christ.  Well, yes I do love the positive feedback.  My favorite compliment in the world is, “You put into words how I feel, but I didn’t know how to say it,” or “That’s exactly what I went through, but I couldn’t put it together in my mind like that.”  What an honor that is!  I appreciate being told I’m pretty despite the largeness of my nose, but I draw life from a heartfelt compliment on my writing!  And ultimately, yes I want people to see Christ.  To see a Christian who is human and still trusts God with my eternity and even my hair for tomorrow.  My hair is unruly, split ended, and a source of constant “Am I good enough?” worry. Unless I’m going somewhere where shorts and a T-shirt are appropriate, in which case I might have washed it last week.  Ultimately, nothing will matter except who we worship and where we will spend eternity.  If anything I do ever in my life points someone toward Christ to trust Him as their Savior, then I am extremely satisfied.

And that’s it.  The first blog post about my dad, or about returning to the blog essentially because of my dad.  Which hurts me to think I am so much more motivated now, but I can’t dwell on that.